Dog and other animals 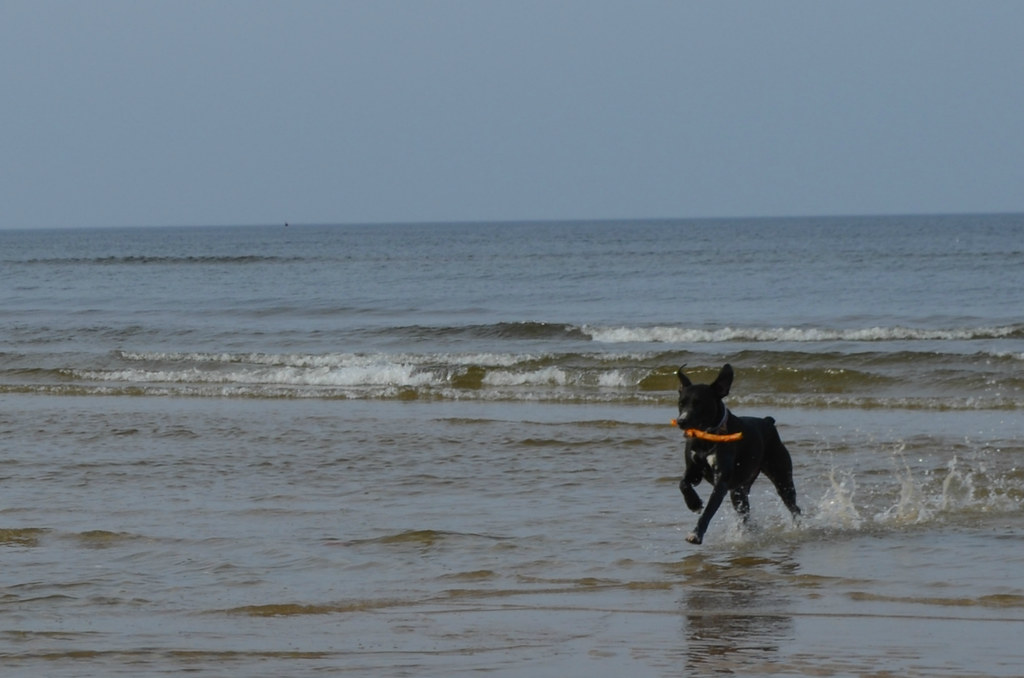 Any dog owner will tell you that dogs are smart. I’m not a dog owner but I had one as a kid. Back then I wasn’t much into noticing clever stuff about animals but I’ve learned a bit since. Here’s an example.

Some years ago Mrs and I were walking on a beach in the summer. There was sand, a few people and waves, it was a nice day. There were dogs, mostly dogs with people but one dog was unaccompanied. This dog spotted us, picked up a handy bit of driftwood and trotted over, dropping the wood in front of us. (The picture is a random internet one, not of this dog).

I was intrigued. We had just been ‘adopted’ as the dog’s stick thrower, and it was the dog’s idea. I wondered how far this would go. So I ignored the stick and walked on. Back he came with his stick, dropped it in front of us and did a sort of half bound away looking back as us as if to say ‘see? you throw it, I run after it. You can do it, sure you can!’

Okay I threw the stick. Dog ran after it grabbed it, brought it back. But the lesson wasn’t finished. I had thrown the stick, and that was pretty good, obviously I could be taught stuff. But I didn’t quite get it yet.

A couple more throws and Dog started running in the wrong direction. I was throwing the stick along the beach but he wanted it thrown into the water. So I threw and Dog jumped in the water, jumped over a wave and then ran and got the stick. He looked at me hard to see if I’d got it. I let him work a bit, a couple more wrong throws (I’m a dumb human). But he eventually convinced me to throw it into the water. Yes! That’s more like it! He ran after the stick, plunged through a wave and brought it back to me, dropped it at my feet ready for the next go.

There were plenty more throws but I realised Dog had all afternoon for this and we had other plans, so I gave it a good throw and then we made ourselves scarce. I could see him looking for us from the car park, then he went off in search of another ‘throw the stick’ student.

This is a dog who could communicate with a stranger well enough to teach me exactly what he wanted. There were at least two steps to the lesson and he worked with me until I got it. Not every dog can do this, neither can every human, especially if you take away language. It takes a bit of mime, and encouraging bark and (with me) quite a lot of persistence.

Much later, when we had our cats, I watched for their efforts at communication. One of them lived to 18 so we got to know him pretty well. In his last year or so his legs didn’t work very well. It meant there was a lot of picking him up and putting him where he wanted to be, and that meant he had to tell us. I’m still not sure how he did it, but he could do it mostly with a look, helped by our reasonable guesses. He also had something like seven different kinds of meow, but it was mostly a look and it ranged from ‘I need to go outside, I need to come inside, need a lap, where’s the dirt box, want a drink…no not from the bowl, it needs to be the shower. I really hate it when you sneeze….’ This went on all day.

Then there are the sheep. Sheep farmers around here think of sheep as absurdly stupid because they panic when the farmer approaches. Well, how would you feel if a tiger walked into the room and you had no way out? We humans kill and eat sheep and they know it. We are their tigers. Our sheep vary in cleverness. There’s Curious I mentioned not long ago who calls out when she wants something. Unlike a cat or a dog she does not want a stick thrown or a cuddle. But she, perhaps dimly, remembers calling to her mother long ago and getting what she wanted, a feed of milk. So she has that pattern to work with, and she uses it to communicate, overcoming her instinct to stay the hell away from the tigers. She is selective, though. She’ll call to Mrs and I, but she doesn’t want to know any other tigers. She actually prefers Mrs who is smaller and doesn’t grab her (once a year) to apply necessary insecticide.

On the whole the sheep know how to be sheep very well. The two paddocks are either side of the house and we walk them through the garden to get from one to the other. They know the way. We’ve done this badly in the past, confused them and had sheep running in directions we didn’t want. But as long as we’re clear they work with us just fine. There’s a shrub one like to take a mouthful of as she passes but she only takes one bite and moves on, she knows where she’s going.

The point of all this, and there is one, is that animals are surely a lot smarter than we often think. Just because they can’t talk and don’t communicate in the way we do we often overlook how they actually do communicate. Often it is just a matter of watching and listening and getting to know them a bit.