The sheep are in our lower paddock. I’ve labelled them so you can see who is who. We can tell them apart at a glance and sometimes visitors look at us funny when we point them out. Sheep are not all the same. 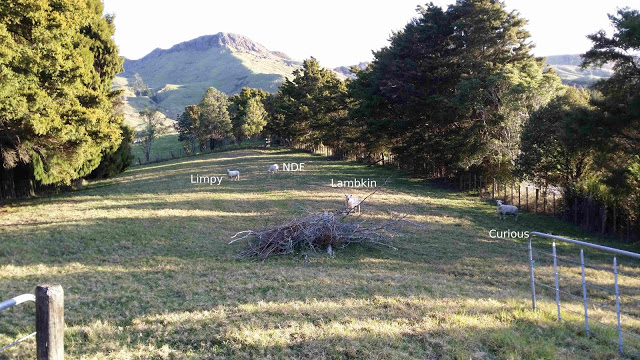 We only have a little bit of land because we aren’t real farmers and our sheep are pets. So we have two paddocks. This one and another about this size. We move the sheep between the two regularly not because they run out of grass but because they get bored.

We also move them because of the weather. Real farmers put their sheep out on the hills (like that one in the background) and let them take care of themselves but they only keep their sheep a few years, probably not more than 6, before they get ‘a ride on a truck’ and never return. Our youngest (Lambkin) is about 9 and Curious is about 10. The other two are older but we’re not sure how much older.

So when the weather turns cold we try and make sure they are in this lower paddock where they can shelter under overhanging trees. The trees on the left are a New Zealand native called totora which keeps rain off very effectively and they huddle under there when the rain is heavy enough for them to notice. That means it is very heavy. Rain doesn’t normally bother them.

I’ve mentioned Curious before. She seems a bit smarter than the others. Last week they were in the other paddock and it was a nice enough day, but Curious was calling out to us. She calls out when she wants us to bring her some apples or she wants to move paddock. There aren’t any apples on the trees just now and she knows that, so she wanted to move. Well, the weather forecast said a storm was on its way so we wanted to get them down to the lower paddock. I’m wondering if she knew about the storm. Maybe she was just bored, I can’t tell, but they’re outside in all weathers, I would not be surprised if they could detect small drops in atmospheric pressure etc, and she’s smart enough to connect that with a coming storm. But I can only speculate.

Anyway they seem happy in the lower paddock and, because we got them shorn a couple of weeks ago, they’re more active than usual. They have to eat more to keep warm. They do have plenty of grass and I toss prunings over the fence for them as I clip back various bushes and trees over the winter. They really like the leaves and the various minerals in them, such as zinc, do them good.