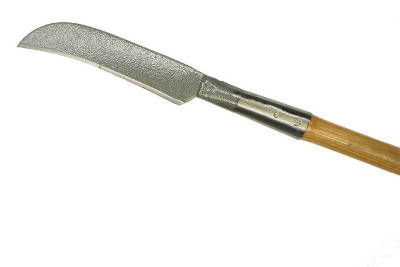 A pattern seems to be emerging:

As soon as someone mentions terrorism we have a picture of a room full of dark haired men somewhere in southern Asia. There are Kalashnikovs laying about, a smell of coffee, boxes of burner phones. The men are carefully plotting an attack, procuring the explosives or whatever, selecting the men who will undertake the mission, perhaps invoking a blessing on them, and funding, lots of funding.

But this is not what we are seeing lately. We are seeing disaffected, often mentally ill people who manage to arm themselves and go crazy. They may invoke the terror organisation de jour as they carry out their action, but that is hardly the point.

In the last month we’ve had a couple of police shootings in New Zealand. These are very unusual here. One of them involved a man brandishing a slasher, an agricultural implement, essentially a blade on a long handle (see picture). You could do a lot of damage to someone with one. Police on the scene told him to drop it, tried their taser and pepper spray, didn’t work. He was heading for a bunch of people. As a last resort they shot him and he is now in hospital. Current supposition (yet to be argued in court) is that drugs were involved. No one has invoked the T word.

Change just a few details there: say he was carrying a gun, had managed to shoot a couple of people, maybe shouted something that sounded like Arabic, and you get to use the T word. But it would still be someone high on drugs. Maybe we should stop using that T word so often. Maybe we should be looking at how we handle drug and mental health issues instead of wasting effort on surveillance. At the very least we should call these awful incidents what they really are: crazy person kills people.