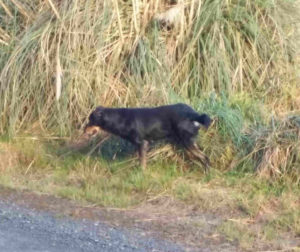 I posted a while ago about a clever dog. Yesterday I came across another one. We had been for a walk and were nearly home. Bear in mind this is in the country so think deserted country road rather than urban landscape. There was a dog wandering all by itself. Now, we don’t really like dogs going out on their own. There are sheep around here and wandering dogs can sometimes go savage and attack sheep. The result is truly awful.

But I recognised this dog. He belongs to my neighbour and I know he’s well disciplined, so what was he doing so far from home? When I say ‘my neighbour’ I don’t mean someone who lives close by. We walked on past him, leaving him sniffing around on the side of the road. Dogs seem to be able to amuse themselves endlessly doing that.

Before we reached out gateway the neighbour’s car went past on its way home. It’s the one she uses for work and is quite distinctive. At that point the dog broke into a run and followed it.

Now it made sense. The neighbour had gone out to work as she does every day. She comes home at the same time every day. So the dog was waiting for her. He knew the time and had trotted up the road to watch for her car.

So two things to note: the dog knew the time perfectly well. There are lots of ways he can do this, including listening to the radio or TV for some common sound sequence that turns up at the right time, or maybe just listening to his stomach. The second thing is the association of the vehicle with the neighbour. There are some mental gymnastics that have to happen to get that right. Sure he saw her get in the car that morning, but that’s a little way off seeing the car and knowing it is her coming home. And he had to recognise the car in the first place.

Animals, dogs in this case, are pretty smart.