A Much Traveled Watch

Some years ago my mother gave me a watch, describing it as ‘Aunt Hettie’s watch’. I was pretty vague as to who ‘Aunt Hettie’ was and why my mother had her watch but it was a nice watch. It wasn’t exactly something I could use because it was a lady’s watch and it was a wind up thing, antique. But it was gold and pretty and it went into the china cabinet with some other treasures.

I took some interest in it back in 2011 and decided to see if I could get it working, it has been stopped for years and these old watches need maintenance. I took it to a jeweler who does that kind of work and he advised me to leave it alone. Fair enough. When I got home I couldn’t find it.

I looked everywhere for it, including lots of places it could not possibly be. It upset me more than I expected. My mother had hung onto this thing for decades and I, instead of passing it on to the next generation, had lost it. I thought of it every so often over the next few months and beat myself up over losing it. These things pass, though. The pain became a dull ache and I moved on.

I carry my laptop in a back back, the kind that has lots of little pockets. When I travel I normally carry my laptop in that pack. There’s the hassle of getting it out when boarding a plane etc, but I like to have my laptop with me. Since 2011 I’ve mostly worked at home rather than go into the office so the back pack has spent much, though not all, of its time on the shelf. Yesterday I was in the home office looking for something I thought was in the pack. One of those pull out things you can clip a key card to and hang on your belt. I’ve just started a new contract and they gave me a key card for the office. The card holder keeps the card safe but always handy for opening doors etc. I could feel it the bottom of the pack, but as I said, there are lots of inner compartments. There’s one zippered one inside another zippered one and when I got that open and reached inside I found… Aunt Hettie’s watch!

The key card holder, if you’re interested, was somewhere else.

So here is Aunt Hettie’s watch. It is gold, probably dates from the 1890s (according the the jeweler). 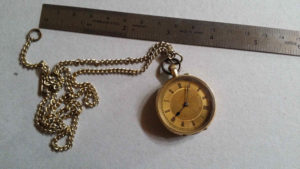 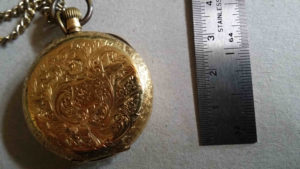 On the close-up you can see there’s some elaborate design, which was common enough on such watches, as well as the letters HMS engraved. Aunt Hettie was Henrietta Mary Stych. She was born in Birmingham, England in 1873 and 9 months later her parents (my great grandparents) arrived in Wellington, New Zealand. She would have been in her 20s when she got the watch. We don’t know if she bought it for herself or perhaps it was a gift from her parents. Here she is in 1891 aged 18, then in 1907 and in 1914 when she married : 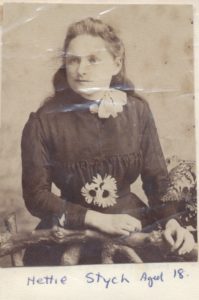 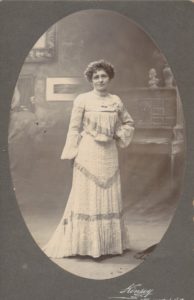 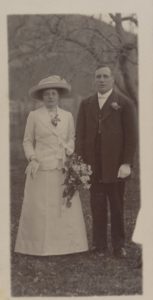 She married at 41 so it is not surprising there were no children from that marriage, which explains why my mother got her aunt’s watch.

She died in 1955 in Blenheim, New Zealand. Blenheim is not far from Koromiko where she married. As far as we know she spent all her previous years in Wellington (except her earliest months) supporting herself as a hairdresser, which is what her mother and one of her brothers did.

Her watch, however, has been with us to Vanuatu three times and to Europe once, and various other travels around New Zealand.