See this hill? There is an side-on view and an end-on view. It looks like a hog-back ridge. 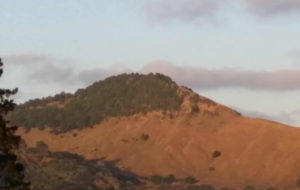 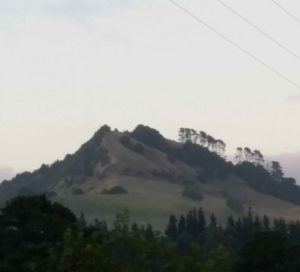 A hog back ridge is caused by tilted strata. Some layers are harder and they hold the top in place like this: 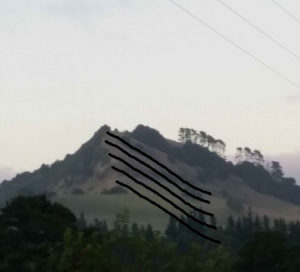 The exposed ‘ends’ of the layers are more easily eroded because they have less structural integrity and water can seep into the layers etc. So the hill slowly crumbles from left to right. Except that is not what is happening here. Take another look at the side view: 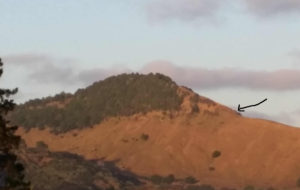 It is a bit hard to see but there is a thick layer of limestone in this hill, I have marked it with an arrow. It runs level right along the side of the hill. Well, that could be just the end of one of those tilted layers couldn’t it?

Yes, it could. But now take another look at the end view. I’ve marked the limestone layer along the hill on the other side and it’s… um… level. Not tilted. So not a hog back ridge at all. It just looks like one. That limestone layer actually shows up right along the line of hills 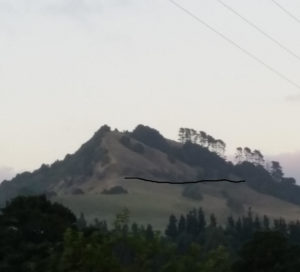 adjoining this one, including the ones above where I took the side on photo. It is roughly level all the way. This is not a tilted strata.

So what is going on? It’s just one of those random erosion things I think. There is a stream running quite close to the hill on the left hand side (on the end-on view), but nothing on the other side. We might wonder why that is, but the presence of the closer stream on the left has carved a steeper face there and left the other side less steep.

The limestone has at least held the top of the hill together. You can see in the side on view where the limestone has been eroded. From the edge of the limestone, where I put the arrow, the hill is much steeper. It is not limestone all the way above that layer, though it might be a layer that is harder than what is under the limestone.

The limestone is full of compressed shells of sea creatures indicating it was once sea floor.