Today one of the sheep did something new. 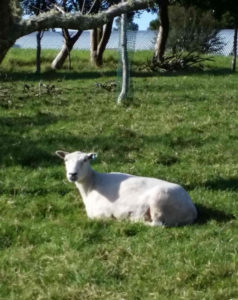 Well, I had not see it before anyway. I have said elsewhere that Curious is the smartest of the four of them. She will often call out to us, asking for treats, asking to move to the other paddock, it’s always the same ‘baa’ so we have to figure it out from context. Sometimes I suspect it is just ‘hi there’. She has also called to us when Lambkin had rolled over and couldn’t get up (too much wool) and when there was a dog. Lambkin (pictured) is the youngest and is usually very cheerful. She tosses her head when she runs and I have mentioned her happy dance in other posts. But just lately she has been more subdued. It might be the cold weather, though the others are the same as usual.

Today we were pruning the fruit trees. This is a good time for the sheep. Leafy branches, even bare branches, are yummy. So they nose around us snaffling up treats. Except today there were only three. It was a heavy frost overnight and Lambkin had found herself a nice sheltered spot by the fence. By the time we got out there it was in full sun and she looked pretty content sitting there. Even so, it was odd for her to miss treats.

Now here’s the new thing. Curious thought so too. She walked away from the treats at one point, moving towards Lambkin and let out a ‘baa’. She calls to us, as I have said, but she never calls to the others. Well, maybe she does when the shearer brings in a dog. There are various worried baas then but they don’t seem to be directed, just expressions of distress. This one was clearly directed at Lambkin, and it was hard to avoid thinking it was a ‘you okay, Lambkin?’ kind of baa.

Lambkin did not baa back, but whatever she did Curious seemed satisfied and came back to sample the treats.

A while later Mrs gave Lambkin some puha, a deep rooted weed we often pull up. That seemed to cheer her up and after eating it she went and joined the others. The picture shows her chewing cud not far from the others. She seems to be enjoying the sunshine.

Mother sheep and their lambs exchange baas so there is a precedent for sheep calling to each other. And Curious calling to us is probably mapped from that, she’s being the lamb. In this case she may have been being the mother. Her and Lambkin are best pals, they tend to hang out together. She is a year older than Lambkin, but at 9 and 10 years old they are both among the oldest sheep you would ever see. This is the advantage of being pets.